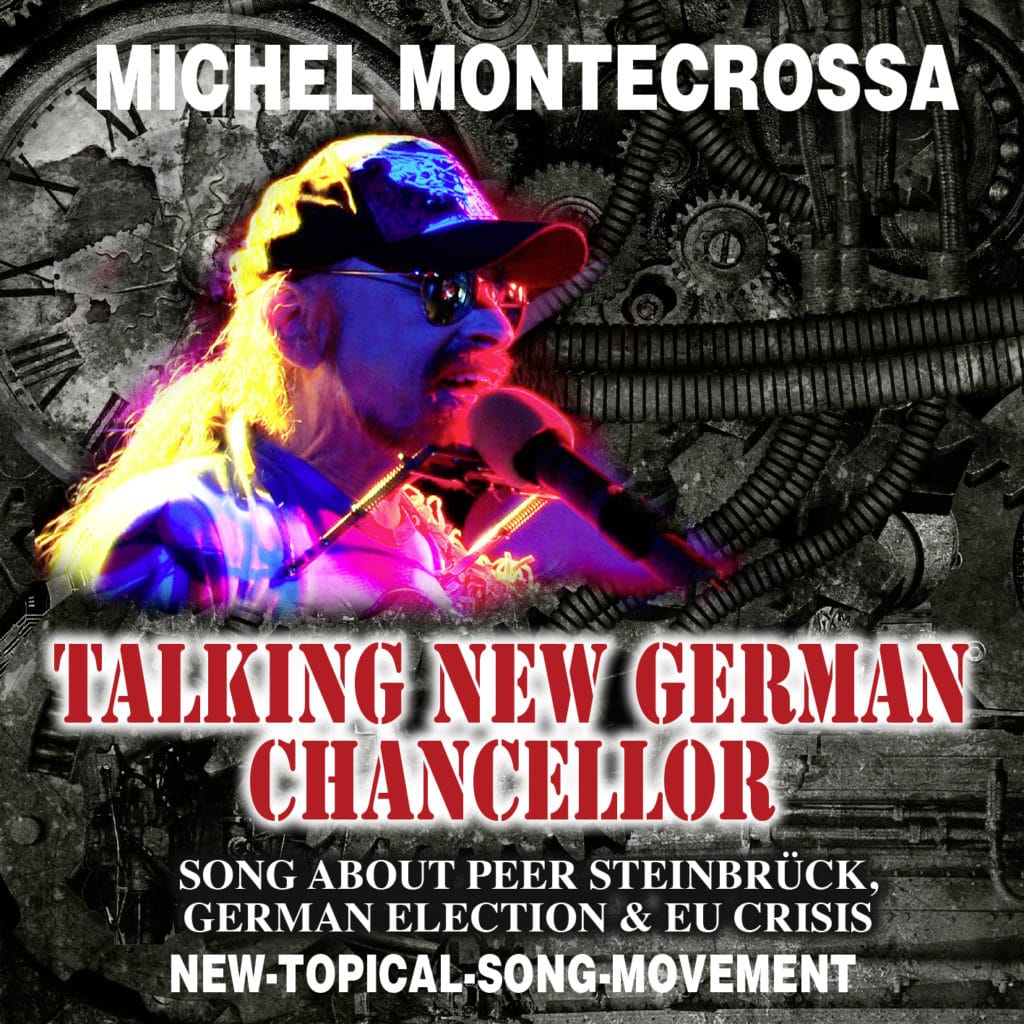 ‘Talking New German Chancellor‘, released by Mira Sound Germany on Audio Single and DVD, is Michel Montecrossa’s New-Topical-Song about Peer Steinbrueck, German Election & EU-Crisis at a time when polito-corruptos and banka-gangstas will have to change their ethics and become good politicians and good bankas in the service of the people if we and our children want to have a peaceful European future.

TALKING NEW GERMAN CHANCELLOR (Song about Peer Steinbrueck, German Election & EU-Crisis) I’m talking about the German chancellor that wants to win, wants to come. / His name now-a-days is Steinbrueck Peer. / He wants to lead Germany, wants to lead us somewhere. / Oh, baby, baby! What is his plan? / Oh, baby, baby! Is it future or is it the endgame? I tell you, baby: Germany has a meaning for this world / and the coming of the United States of Planet Earth. / For Germany is practical and skilful, has the good ethical feel. / Oh, baby, baby! The feel for community, / for standing together in truth of love and liberty. Polito corruptos must change into politicians that don’t cheat the people / who are the power, the working hand, the real. / The German working hand and human spirit are the key / for this nation to set free a new policy / of liberation from the greed of wrong banka schemes. I tell you, baby, Germany must stop to be banka slave, / must stop to give our tax money to dangerous speculator gangs. / Germany needs a new chancellor who for the people takes a stand. / Oh, baby, baby! With the rich less rich / and the poor no more poor we’ll together surely find the clue. Real value banking must replace gangsta banking. / Real statesmanship must replace corrupto-acting. / On the way to World Unity Germany must be a-walking. / Oh, baby, baby! Is Steinbrueck our man? / Oh, baby, baby! Is he our friend? Will he bring down the cost of living so that our wages can compete / with wages all over the globe so that quality can easily be the big deal? / Will he bring to Germany the peace and the jobs that the people need? / Oh, baby, baby! What is his plan? / Oh, baby, baby! Is it future or the endgame? Lyrics & Music: Michel Montecrossa © Mira Sound Germany