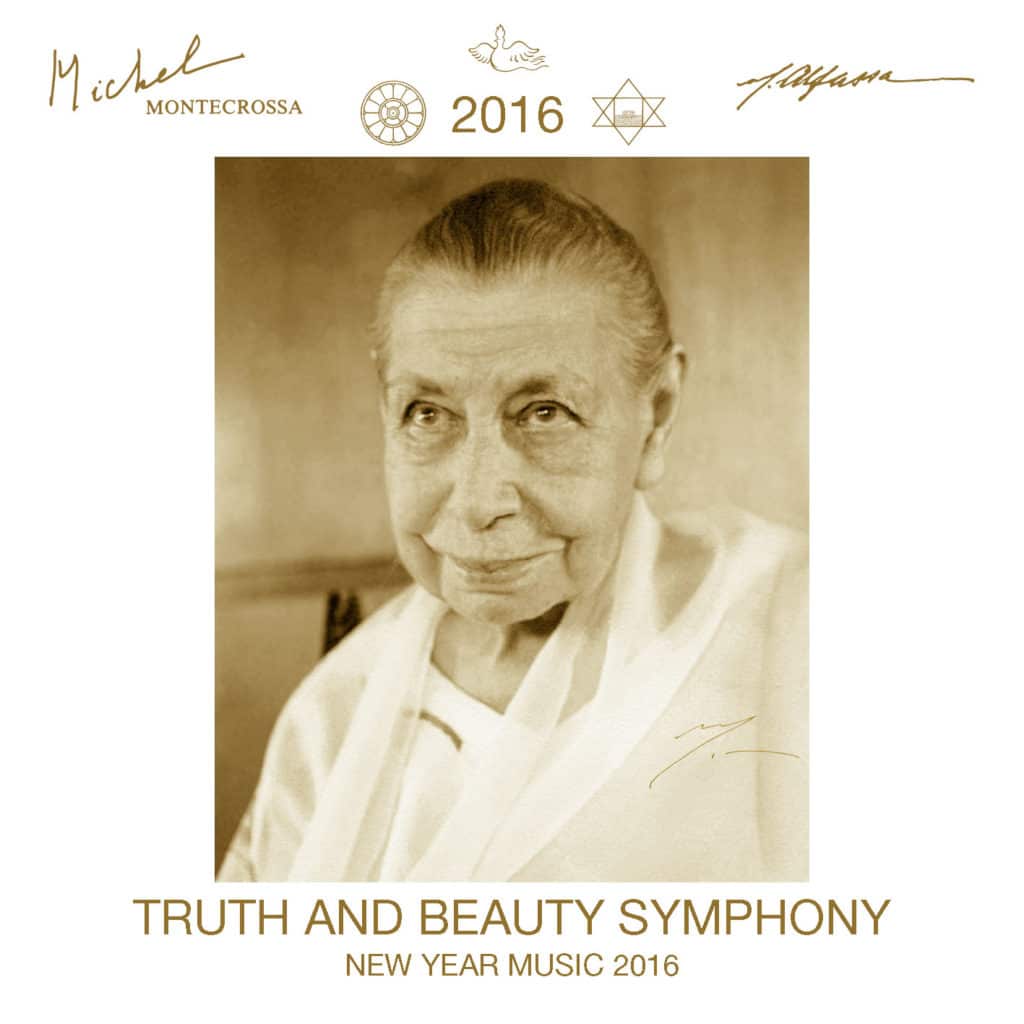 Michel Montecrossa’s New Year Meditation Music 2016 with the title ‘Truth And Beauty Symphony’ released by Mira Sound Germany as Audio-CD and Download presents 12 symphonic music instrumentals by Michel Montecrossa combined with messages and music of Mira Alfassa – The Mother as well as recitations from her theater play ‘The Great Secret’ spoken by Mira Alfassa in French as parts of the ‘Truth & Beauty Symphony’. The Audio-CD and download include a booklet with the English translation of all spoken words by Mira Alfassa from the New Year Meditation Music 2016: ‘Truth And Beauty Symphony’.

Michel Montecrossa says about the ‘Truth And Beauty Symphony’:
“Truth and Beauty are the basis for the manifestation of a New Consciousness and Consciousness Force which can transform the earth and realize the Supramental Life of Love and Freedom in the material world. The ‘Truth And Beauty Symphony’ is dedicated to this realization which already lives in the depth of our being and from there can make all life into the expression of the Divine Joy, sublime, eternal.”

The Mother’s recitations from her theater play ‘The Great Secret’ which are part of the ‘Truth And Beauty Symphony’:

The Mother’s New Year Message, Part One, recited from ‘The Great Secret’:

“It is not too late, it is never too late.
Let us unite our wills in a great aspiration; let us pray for an intervention of the Grace. A miracle can always happen. Faith has a sovereign power. And if indeed we are to take part in the great work to be done, then an intervention will come and prolong our lives. Let us pray with the humility of the wise and the candid faith of a child; let us invoke with sincerity this new Consciousness, this new Force, Truth and Beauty which must manifest, so that the earth may be transformed and the supramental life realized in the material world.”

They all concentrate in silence. The Unknown Man continues:
“O Supreme Reality, grant that we may live integrally the marvellous secret that is now revealed to us.”

The Mother’s Recitation #1 from ‘The Great Secret’:

None of you are satisfied but at the same time none of you know what to do. None of you know the solution to the twofold problem presented by life and your own goodwill. I say a twofold problem, for in fact it has two aspects, one individual and the other collective: how can one fully realize one’s own good and the good of others? None of you have found the solution, for this riddle of life cannot be solved by mental man, however superior he may be. For that, one must be born into a new and higher consciousness, the Truth-Consciousness. For behind these fleeting appearances there is an eternal reality, behind this unconscious and warring multitude there is a single, serene Consciousness, behind these endless and innumerable falsehoods there is a pure, radiant Truth.

The Mother’s Recitation #2 from ‘The Great Secret’:

Behind this obscure and obdurate ignorance there is a sovereign knowledge. And this Reality is here, very near, at the centre of your being as it is at the centre of the universe. You have only to find it and live it and you will be able to solve all your problems, overcome all your difficulties.

The Mother’s Recitation #3 from ‘The Great Secret’:

If we want to find a true solution to the confusion, chaos and misery of the world, we have to find it in the world itself. And this is in fact where it is to be found. It exists potentially, we have only to discover it; it is neither mystic nor imaginary; it is altogether concrete and disclosed to us by Nature herself, if we know how to observe her. For the movement of Nature is an ascending one; from one form, one species, she brings forth a new one capable of manifesting something more of the universal consciousness. All goes to show that man is not the last step in terrestrial evolution. The human species will necessarily be succeeded by a new one which will be to man what man is to the animal; the present human consciousness will be replaced by a new consciousness, no longer mental but supramental.

The Mother’s Recitation #4 from ‘The Great Secret’:

The time has come for this possibility, promised and anticipated for so long, to become a living reality upon earth, and that is why you are all unsatisfied and feel that you have been unable to obtain what you wanted from life. Nothing but a radical change of consciousness can deliver the world from its present obscurity. Indeed, this transformation of the consciousness, this manifestation of a higher and truer consciousness, is not only possible but certain; it is the very aim of our existence, the purpose of life upon earth. First the consciousness must be transformed, then life, then forms; it is in this order that the new creation will unfold. All Nature’s activity is in fact a progressive return towards the Supreme Reality which is both the origin and the goal of the universe, in its totality as well as in its smallest element. We must become concretely what we are essentially; we must live integrally the truth, the beauty, the power and the perfection that are hidden in the depths of our being, and then all life will become the expression of the divine Joy, sublime, eternal.