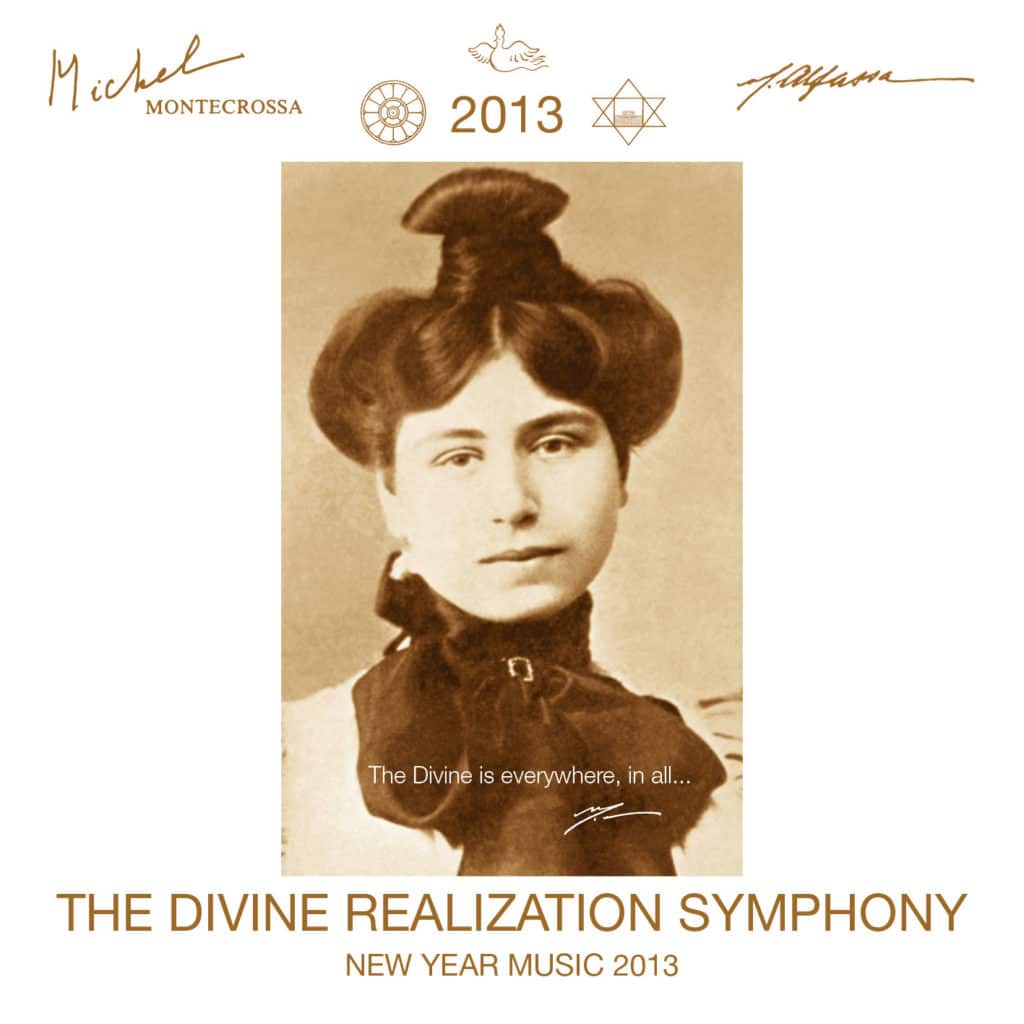 Michel Montecrossa says:
“‘The Divine Realization Symphony’ is modern classical music that, together with the inspiring messages of Mira Alfassa – The Mother, gives peace, inner stability and enlightenment in these times of confusion and crises.”

The Mother’s New Year Message 2013 and recitations from the Dhammapada:
“The Divine is everywhere, in all …”

The Mother’s Message:
“Sri Aurobindo has come to tell us: It is not necessary to leave the earth to find the Truth, it is not necessary to leave life to find one’s soul, it is not necessary to give up the world or have limited beliefs in order to enter into relation with the Divine. The Divine is everywhere, in all …
The starting-point: to want it, truly want it, need it. The next step: to think above all, of that. A day will come, very quickly, when one won’t be able to think of anything else.
That is the one thing which counts. And then…
One formulates one’s aspiration, lets the true prayer spring up from one’s heart, expressing the sincerity of the need. And then… well, one will see what happens.
Something will happen. Surely something will happen. For everyone it will take a different form.”

The Mother’s recitations from the Dhammapada:
By his effort, his vigilance, his discipline and selfmastery, the intelligent man should create for himself an island which no flood can submerge.
The fools, devoid of intelligence, give themselves up to negligence. The true sage guards vigilance as his most precious treasure.
The intelligent man who by his vigilance has dispelled negligence, mounts to the heights of wisdom, whence he looks upon the many afflicted as one on a mountain looks down upon the people of the plain.
Vigilant among those who are negligent, perfectly awake among those who sleep, the intelligent man advances like a rapid steed leaving behind a weary horse.

Just as a beautiful flower which is both radiant and sweetly scented, so are the beautiful words of one who acts accordingly.
Just as many garlands can be made from a heap of flowers, so a mortal can accumulate much merit by good deeds.
The fragrance of flowers, even that of sandalwood or of incense, even that of jasmine, cannot go against the wind; but the sweet fragrance of intelligence goes against the wind. All around the man of intelligence spreads the fragrance of his virtue.
As the beautiful scented lily rises by the wayside, even so the disciple of the Perfectly Enlightened One, radiant with intelligence, rises from the blind and ignorant multitude.

We should seek the company of the sage who shows us our faults, as if he were showing us a hidden treasure; it is best to cultivate relations with such a man because he cannot be harmful to us. He will bring us only good.
One who exhorts us to good and dissuades us from doing evil is appreciated, esteemed by the just man and hated by the unjust.
Do not seek the company or friendship of men of base character, but let us consort with men of worth and let us seek friendship with the best among men.
He who drinks directly from the source of the Teaching lives happy in serenity of mind.
The sage who has steeped himself in the Teaching, becomes perfectly peaceful like a deep lake, calm and clear.
Neither for his own sake, nor for the sake of others does the sage desire children, riches or domains. He does not aim for his own success by unjust ways. Such a man is virtuous, wise and just.
Few men cross to the other shore. Most men remain and do no more than run up and down along this shore.
But those who live according to the Teaching cross beyond the realm of Death, however difficult may be the passage.
The sage will leave behind the dark ways of existence, but he will follow the way of light.