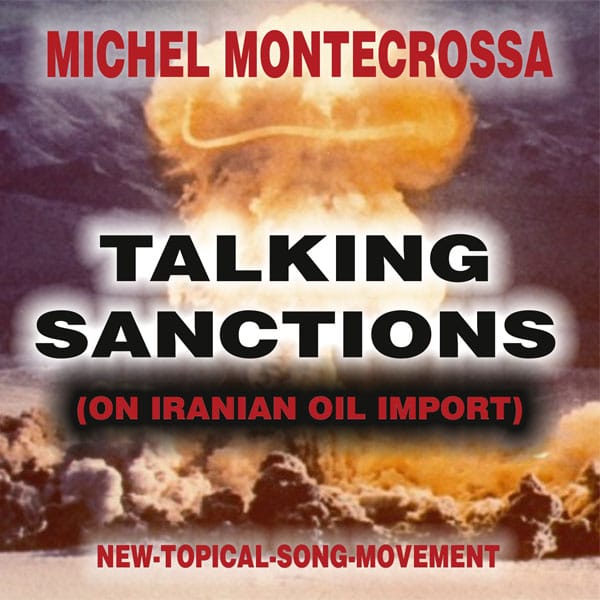 ‘Talking Sanctions (On Iranian Oil Import), released by Mira Sound Germany on Audio Single and DVD, is Michel Montecrossa’s New-Topical-Song about EU sanctions on Iranian oil import and the dangers of bad foreign policy for the European people.

Michel Montecrossa says about ‘Talking Sanctions’ (On Iranian Oil Import):
“EU-sanctions on Iranian oil import are no good foreign policy. They boost division, non-communication and the danger of drifting into big war. The people of Europe and everywhere don’t need that. They need true statesmen and true stateswomen with wisdom, capable of a mature foreign policy that secures lasting peace through cultural openness, respect, positive communication and flourishing trade among the nations for the happiness and welfare of all people.
The EU must be a good player in the concert of Eurasia and should not create rising tensions between Europe on one side and Russia, Iran, China, India and other countries on the other side. Such a policy is against the good of the people, against the future of us all and therefore should not be pursued.”

TALKING SANCTIONS (ON IRANIAN OIL IMPORT)
Sanctions are no foreign policy, / they are the absence of common sense. / True foreign policy worthy the name / is the one of culture and trade agreements.
Sanctions are the way to build up aggression. / Aggression, as you all know, is the way to war. / Sanctions on Iranian oil import / is not good for the unity of us all.
The earth needs unity and not conflicts. / Unity comes through goodwill and respect, / makes different systems work together / and different minds open to each other.
Europe and Iran must find together / on the way to a united world of peace / and of progress for the good of all people. / Foreign policy maker we need worthy the name.
Sanctions are no foreign policy, / they are the absence of common sense. / Listenin‘ and talkin‘ true is good, / leads to action that will help the people.
People everywhere want to live happy / through peace and jobs and good money, / through health care and education / for the loved ones, / through loyalty and good human values, / through living unity of all nations on earth, / knowing that sanctions will only drive us crazy.
Lyrics & Music: Michel Montecrossa, © Mira Sound Germany