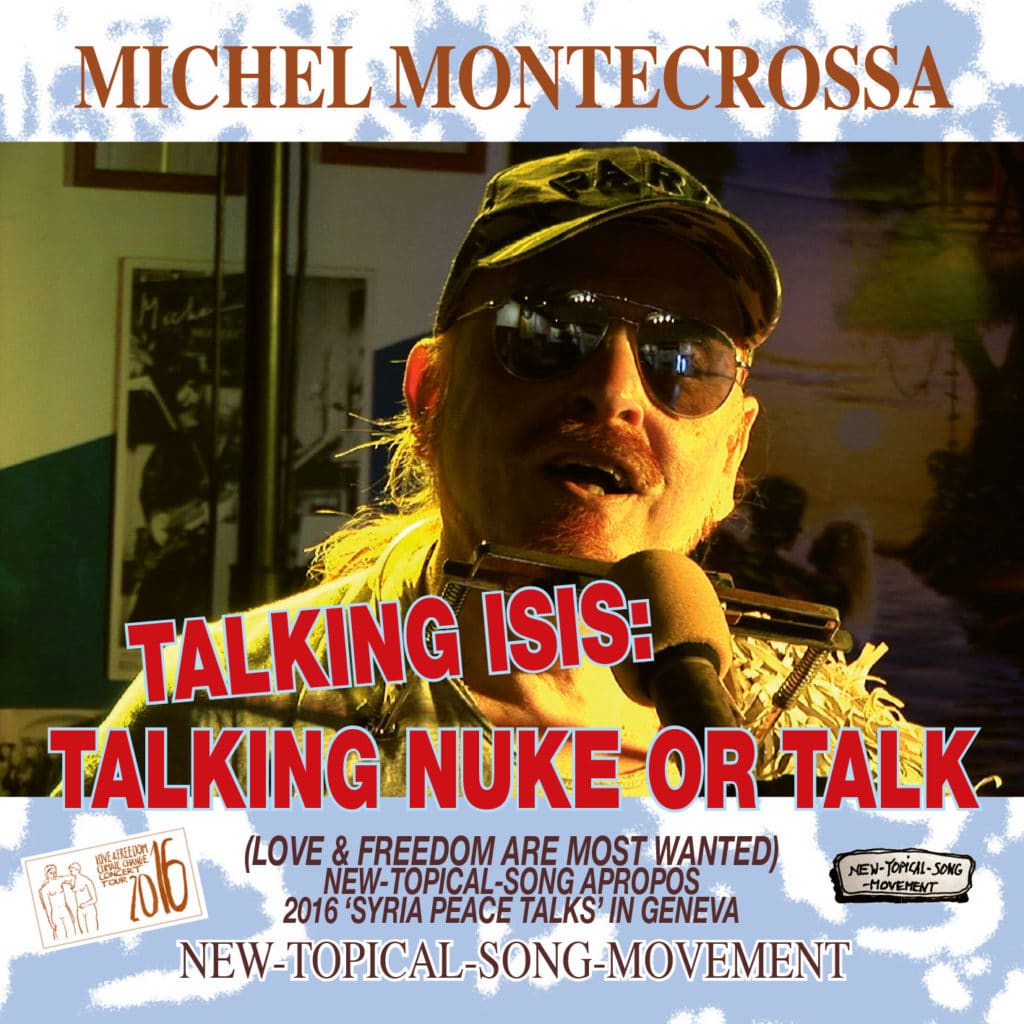 ‘Talking Isis: Talking Nuke Or Talk’, released by Mira Sound Germany on Audio-CD, DVD and as Download, is Michel Montecrossa’s New-Topical-Song apropos 2016 ’Syria Peace Talks’ in Geneva which have no meaning without inclusion of ISIS. Big war industry has big interest in big wars. Michel Montecrossa warns that this interest can easily go out of control and lead to an all-out nuclear war. Talks and diplomacy are needed for the Middle East that are based on an intelligent understanding of the Islamic thinking in the context of a further evolution of consciousness embedded in the great Ideal of Human Unity.

Michel Montecrossa says about his New-Topical-Song ‘Talking Isis: Talking Nuke Or Talk’:
“My New-Topical-Song ‘Talking Isis: Talking Nuke Or Talk’ takes a stand for diplomacy instead of insanity. It was written at the time when the 2016 ’Syria Peace Talks’ began in Geneva aiming at finding a solution for the Middle East World War and Refugees Crisis. In my song I say that peace talks must bring all groupings and nations involved to the table, most of all ISIS which represents a central world problem. Otherwise the situation goes out of control and can turn into all-out nuclear war. ‘It’s nuke or talk, peace or World War’, that’s what I say. And I also say that love and freedom are most wanted.“

“Allah commands the doing of good,
he forbids all shameful deeds.“
This is what the Koran says,
this is what ISIS must respect.

In the Middle East the spiral of violence
is heading towards nuclear war.
ISIS now better takes a step
for getting to the table to show respect.

Voices are there that say:
“Bomb the radicals to the table!“
“Bomb terror out of existence!“
It’s nuke or talk, peace or world war.
Love and Freedom are most wanted!

That’s why I say to you:
“Turn your eyes more to the coming light
and less to any immediate darkness.
So the light grows always.“

“Allah commands the doing of good,
he forbids all shameful deeds.“
This is what the Koran says,
this is what ISIS must do next.