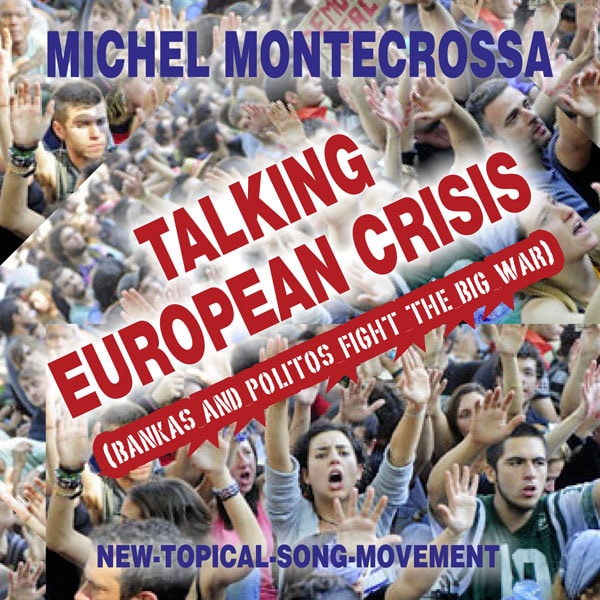 ‘Talking European Crisis (Bankas and Politos fight the big War)’, released by Mira Sound Germany on Audio Single and DVD, is Michel Montecrossa’s New-Topical-Song dedicated to liberating the European Union from ruthless polito-corruptos and banka-gangstas for the good of a prospering European Union of all the people.

Michel Montecrossa says about ‘Talking European Crisis’:
“There is no European or any other crisis if we expand our consciousness. The banka and polito world is only a narrow minded hypnotism to make people think like bureaucrats, functionaries, managers and unquestioning system slaves.
Activate your brain, leave the unreal system hypnotism and be powerfully free in the real world of love and unity.
Then you can make true everything that’s good for all and the harmful power and greed obsessions of mad bankas and politos will simply evaporate.”

TALKING EUROPEAN CRISIS (BANKAS AND POLITOS FIGHT THE BIG WAR)
Bankas and politos fight the big war. / It’s not the war on terror but the war on us all. / Banka-polito world, I say, is not human, / is a greed and software based world of cruel oppression, / is a world of cheap labour and sell-out slavery.
Genocide and torture are the end of the road / that begins with austerity and big bail out money / to make the rich richer and the less rich poor / and the poor poorer and void of liberty. / Be it Europe or the whole world: It’s the wrong road.
Bankas and politos fight the big war. / Bankas are united in their global greed system / and can be active everywhere. / Politos have big weapons but are limited to nations. / That’s why politos lose their battles with the bankas / and we, the people, are cheated by both of them.
But our future is strong with the young dream, / is a love based world of total liberty, / is a world that cares for all humanity. / The European crisis is no crisis at all / if we follow the true way, hear the unity call.
Lyrics & Music: Michel Montecrossa, © Mira Sound Germany