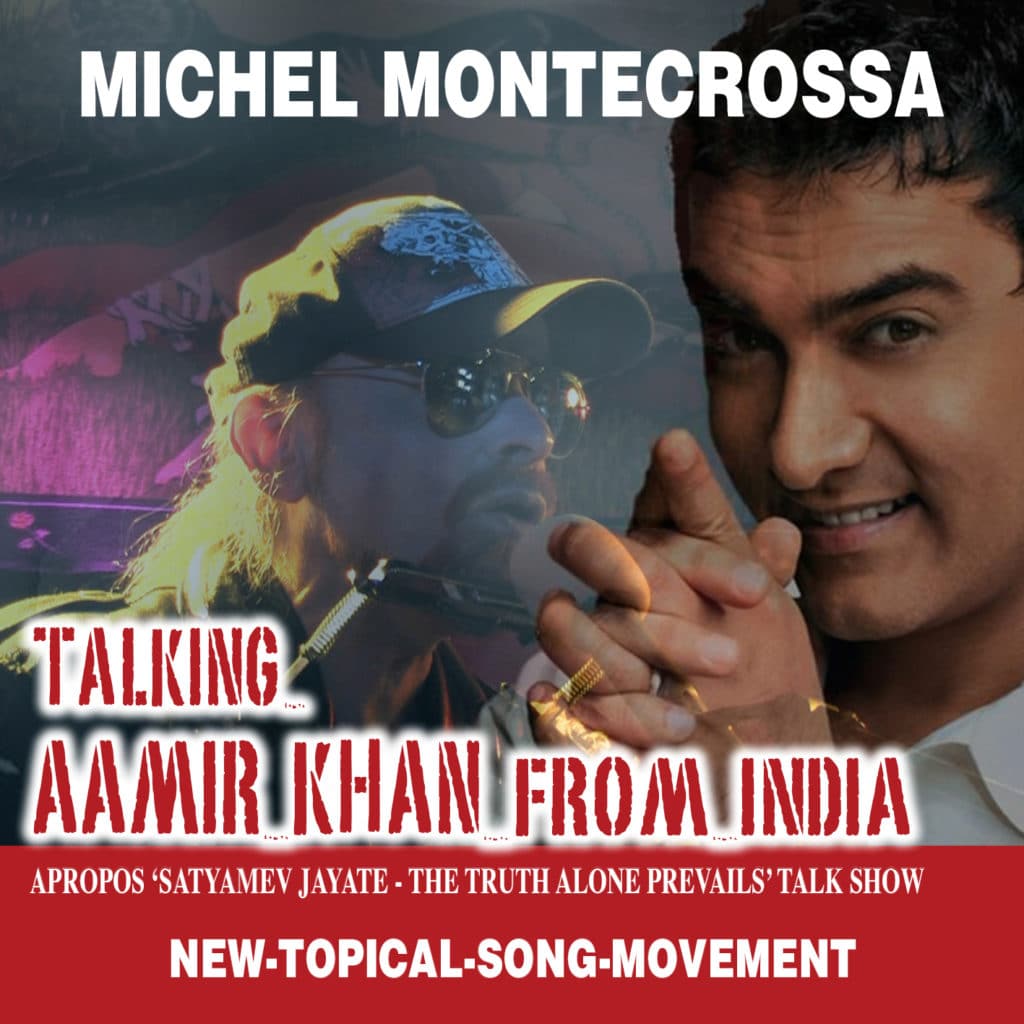 ‘Talking Aamir Khan from India‘, released by Mira Sound Germany on Audio Single and DVD, is Michel Montecrossa’s New-Topical-Song, calling for cultural, social, humanitarian and ecological awakening to the urgent need for Human Unity, for co-operation, for freedom and standing together for a young future of hope, love and peace.

Michel Montecrossa says:
“My New-Topical-Song and movie ‘Talking Aamir Khan From India’ was triggered by Bollywood megastar Aamir Khan’s controversial and taboo breaking talk show ‘Satyamev Jayate – The Truth Alone Prevails’. This show attracts a mass viewership of up to 500 Millions. Tackling some of India’s most serious social issues it is a great and important reaction to the big waves of change sweeping over the globe, born from the international democracy and occupy movements, courageous women activists, green energy revolutionaries and the mass outcry of the jobless young everywhere demanding free access to education, demanding their future from the dangerous old, demanding a world without corruption, discrimination, slavery, abuse, poverty and hunger.
India is the home of a great part of the world population. Maybe India is ripe today for a historical social change that will help in the building of a future world of peace, progress, prosperity and unity for the entire Family of Man. ‘The Truth Alone Prevails’ can be a good help on this way and that’s why I sing this song: Let’s join forces for the Living Celebration of Humanity on this Earth.”

TALKING AAMIR KHAN FROM INDIA
(Apropos ‘Satyamev Jayate – The Truth Alone Prevails’ Talk Show)
Aamir Khan is a good man, megastar by hand. / To India he brings his ideals of social change, / saying: “The truth alone prevails,” / in his talk show gives a voice to the lonely, to their pain.
When Aamir speaks out loud, rapists are driven out / and injustice is no longer covered by the dark. / He is the Indian Oprah for hundreds of millions of viewers, / tackling India’s most serious social issues.
Aamir Khan is breaking taboos to make things better, / is pointing to the future of great social changes in India happening, / is pointing, I say, in the direction of change in the world / and for this future world building India’s change is most important, my friend.
Aamir Khan is saying to every one in every region: / “People who are part of the problem can become part of the solution.” / And the people are responding well as do the politicians. / And one can ask: “Is the upper class going social?”
Aamir Khan is a good man, megastar by hand. / To India he brings ideals of change for the better, / saying: “The truth alone prevails.” / And I say: “We see history in the making in India and the whole wide world.”
“Listen, all ye people! Reveal the tricky stuff! / Join the peaceful change! Communicate your problems! / Share your lonely suffering with the Family of Man! / Join the Living Celebration of Humanity on this Earth!”
Lyrics & Music: Michel Montecrossa © Mira Sound Germany