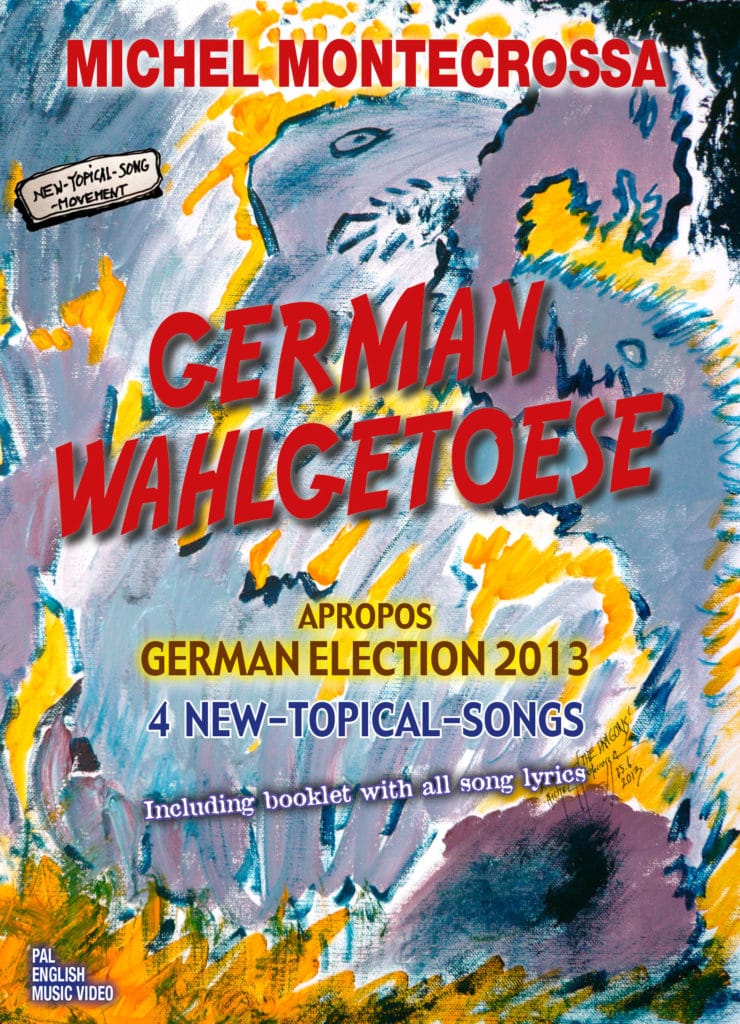 ‘German Wahlgetoese’ is Michel Montecrossa’s 4 New-Topical-Songs and Movies Collection presenting the titles ‘Talking German Wahlgetoese – Or: Who Is The Clown?’, ‘Talking New German Chancellor‘, ‘Talking The German Chancellor I Want‘, ‘Talking Angel for Germany‘, released by Mira Sound Germany on Audio-CD, DVD and Video Download, triggered by the money driven brainwash campaign for finding a new German chancellor: It is the time for either future building or endgame playing. It is the time for answers and Michel Montecrossa’s songs give the answers we all need.

In Germany there is rumbling in the air,
“Wahlgetoese” as they say.
The Steinbrueck candidate reaches Steinreich levels,
promotes himself as the little devil
that at last downgrades politics into the vulgar:
It’s the image-suicide of the Social Democrats
and of their funny star.

Framing other politos as clowns won’t help
and it surely won’t create the needed friends.
But friends we need for European Unity,
for Europe intelligent and able to see
that we, the people, don’t need troublemakers on top
making our Europe into a big flop.

What then would Mr. Steinbrueck-Steinreich say
if as clown he is portrayed,
a clown of the German-European-Reich,
the Social Democratic suicide?
The German people need the real answers and not tricks
or publicity stunts of a vulgar rich.

The German Wahlgetoese will be without end,
But I hope the people will not bend
to the thrill of nonsense and a painful end
of needed progress, justice and common sense.
Politos are already vulgar enough,
now it’s time to change and bring the real stuff, friends!

I tell you, baby: Germany has a meaning for this world
and the coming of the United States of Planet Earth.
For Germany is practical and skilful, has the good ethical feel.
Oh, baby, baby! The feel for community,
for standing together in truth of love and liberty.

Polito corruptos must change into politicians that don’t cheat the people
who are the power, the working hand, the real.
The German working hand and human spirit are the key
for this nation to set free a new policy
of liberation from the greed of wrong banka schemes.

I tell you, baby, Germany must stop to be banka slave,
must stop to give our tax money to dangerous speculator gangs.
Germany needs a new chancellor who for the people takes a stand.
Oh, baby, baby! With the rich less rich
and the poor no more poor we’ll together surely find the clue.

Will he bring down the cost of living so that our wages can compete
with wages all over the globe so that quality can easily be the big deal?
Will he bring to Germany the peace and the jobs that the people need?
Oh, baby, baby! What is his plan?
Oh, baby, baby! Is it future or the endgame?

Talking The German Chancellor I Want

The German Chancellor I want is a she or he
who is courageous enough to put banka-gangstas in their place,
who is not a money greedy polito-corrupto and good-for-nothing,
who is intelligent and selfless enough to understand
that to work for the people means saving our good nation.

The German Chancellor I want is a she or he
who takes a liberating stand ‘gainst Goldman-Sachs world-domination,
who is activating the true statesmanship
for handling all the rich cheaters,
the club of the world’s thirty most lawless wealthy
and the Dragi-Monti style tax payer misleaders.

The German Chancellor I want is a she or he
who brings down our living cost to save
German working force,
who leads on the way to the United States of Planet Earth,
who stands for young and new political ethics
in touch with people’s reality,
a young generation of lady politicians
on the side of life and peace.

The German Chancellor I want
is just like me
taking a stand for Love and World Unity,
for Love Action of the free.

the need of the people
for freedom from fear
of financial disaster
made by polito corruptos.

Is Germany ready
for the young and unexpected?
For the end of banka gangstas
and rising cost and taxes?

Is Germany ready
for true information
’bout what really happens
on the way to Human Unity?

Germany won’t make it
without an angel that leads
on the way to World Union
where all humanity can meet.

Only unity knows the answer
to the problems all around.
“Act together!” is the answer
of my angel soul unbound.

France is looking forward
to E.U. government.
Is Germany doing the same?
Is an angel lending a hand?

Who is the angel intervening
when things turn anti-social
and nazism becomes the new religion?
Is Germany ready for Angel-Action?