On The Dhammapada, Vol. 7 – Vigilance 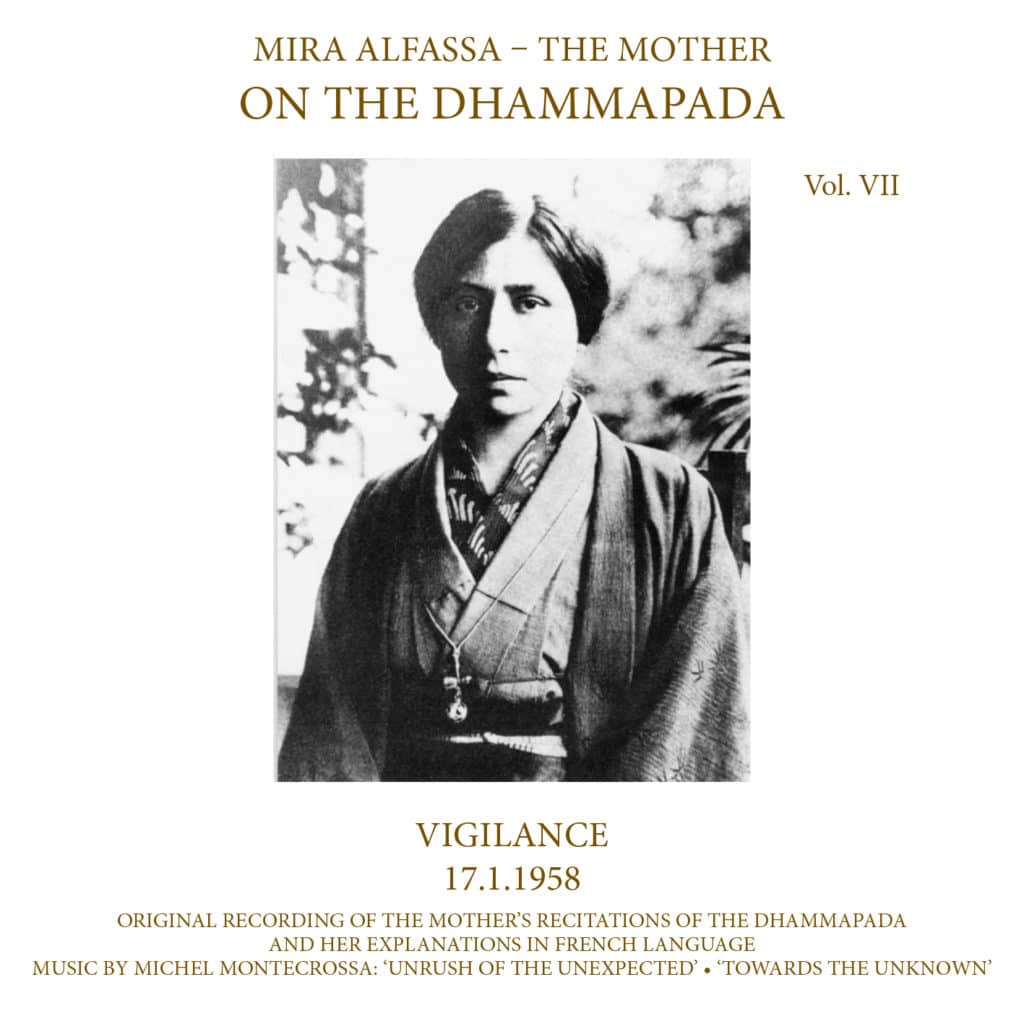 Original recording of The Mother’s recitations of the Dhammapada and her Explanations in French language.
Music by Michel Montecrossa: ‘Unrush Of The Unexpected’ • ‘Towards The Unknown’

“In these texts the word Nirvana is not used in the sense of annihilation, as you see, but in the sense of an eternal existence in opposition to life and death, as we know them in the present earthly existence, and which are contrary to each other: life contrary to death, death contrary to life. It is not that life which is spoken of, but the eternal existence which is beyond life and death – the true existence.
Vigilance means to be awake, to be on one’s guard, to be sincere – never to be taken by surprise. When you want to do sadhana (Consciousness Development), at each moment of your life, there is a choice between taking a step that leads to the goal and falling asleep or sometimes even going backwards, telling yourself, ‘Oh, later on, not immediately’ – sitting down on the way.
To be vigilant is not merely to resist what pulls you downward, but above all to be alert in order not to lose any opportunity to progress, any opportunity to overcome a weakness, to resist a temptation, any opportunity to learn something, to correct something, to master something. If you are vigilant, you can do in a few days what would otherwise take years. If you are vigilant, you change each circumstance of your life, each action, each movement into an occasion for coming nearer to the goal.
There are two kinds of vigilance, active and passive. There is a vigilance that gives you a warning if you are about to make a mistake, if you are making a wrong choice, if you are being weak or allowing yourself to be tempted, and there is the active vigilance which seeks an opportunity to progress, seeks to utilise every circumstance to advance more quickly. There is a difference between preventing yourself from falling and advancing more quickly.
And both are absolutely necessary.
He who is not vigilant is already dead. He has lost contact with the true purpose of existence and of life.
So the hours, circumstances, life pass in vain, bringing nothing, and you awake from your somnolence in a hole from which it is very difficult to escape.”
Mira Alfassa – The Mother