On The Dhammapada, Vol. 32 - The Bhikkhu 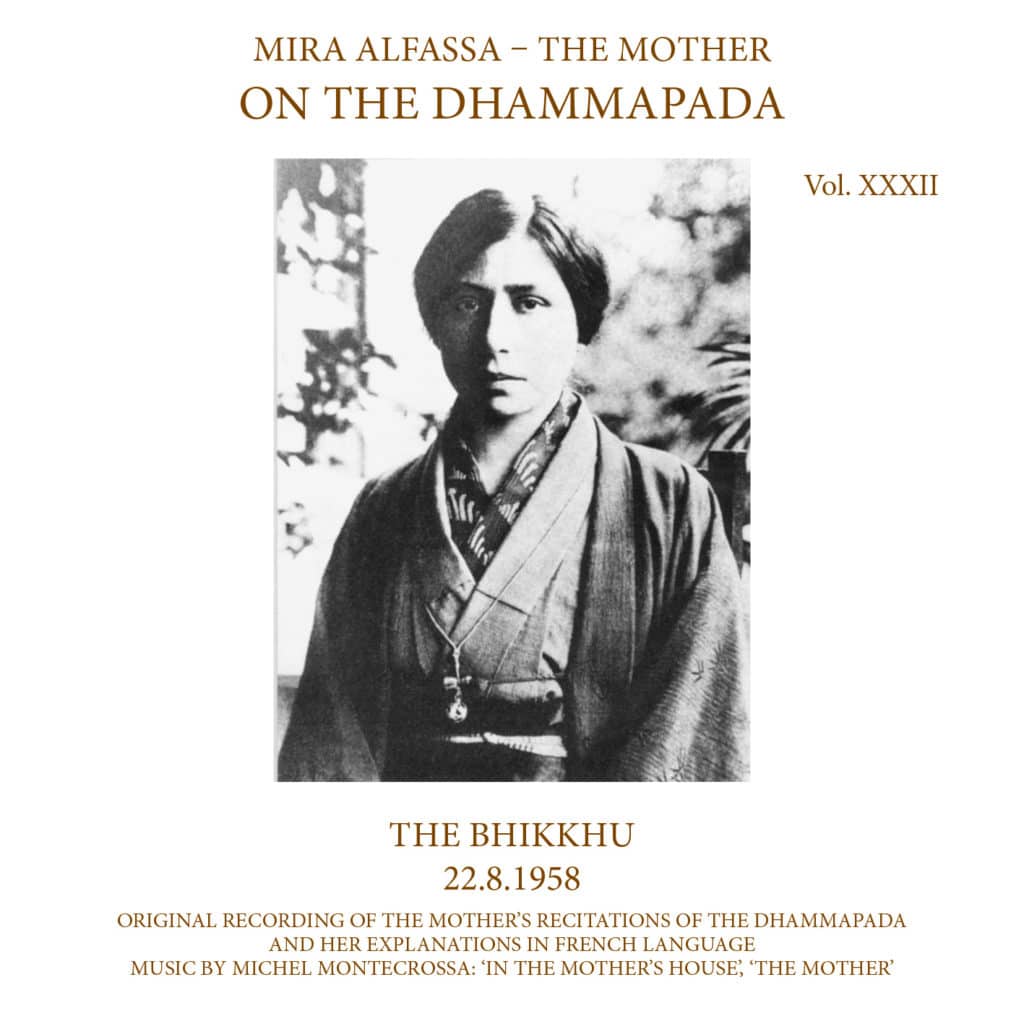 Original recording of The Mother’s recitations of the Dhammapada and her Explanations in French language
Music by Michel Montecrossa: ‘In The Mother’s House’, ‘The Mother’

It is good to control one’s actions, words, mind. Control in all things is good. The Bhikkhu who controls himself entirely is delivered from all suffering.

The man who is master over his hands, his feet and his tongue, who controls himself wholly, who delights in meditation, who is calm and leads a solitary life, can be called a Bhikkhu.

The Bhikkhu who is master over his tongue and is moderate in speech, who is modest, who luminously interprets the Doctrine, in truth his words are as sweet as honey.

The Bhikkhu should not treat his own progress (in wisdom and goodness) lightly, nor envy the progress of others; for the Bhikkhu who is envious cannot achieve concentration.

Even if the progress he has made is slight, the Bhikkhu should not despise it; if his life is pure and his effort persevering, the gods themselves shall praise him for it.

One who is not attached to name and form, who does not think, “This belongs to me”, and who does not grieve over what does not exist, he, in truth, is called a Bhikkhu.

The Bhikkhu who lives a life of loving kindness and who is filled with faith in the teaching of the Enlightened One, that Bhikkhu will attain the peace of Nirvana, the supreme bliss from which every conditioned element has vanished.

Empty this boat, O Bhikkhu; once lightened, the boat of your body will sail more lightly and having rejected desire and hatred you shall enter Nirvana.

Break the five bonds (belief in the ego, doubt, belief in vain rites and ceremonies, craving and bad will). Renounce these five other bonds (the desire to live in the world of forms, the desire to live in the subtle world, pride, restlessness and ignorance). Cultivate these five (faith, energy, mindfulness, meditation, and wisdom). The Bhikkhu who is thus five times free is said to be “he who has crossed over the flood”.

Meditate, O Bhikkhus, do not be negligent. Your minds should not turn towards the pleasures of the senses; for if by negligence you swallowed a red-hot iron ball, when you felt the burning you would lament, crying, “Oh, how painful it is!”

The Bhikkhu who has entered the abode of emptiness, the Bhikkhu of serene mind, enjoys delight beyond the human, in the clear vision of the Doctrine.

Each time that he concentrates on the appearance and disappearance of all conditioned things, he enjoys the happiness and the delight of those who have attained immortality.

These things are for the wise Bhikkhu the very basis of the religious life: mastery of the senses, contentment, conduct according to the code of discipline, association with noble friends who lead a life of constant purity.

The Bhikkhu should be cordial, kind and polite; thus in the fullness of his joy, he will put an end to suffering.

Just as the jasmine sheds its faded petals, so also the Bhikkhu sheds desire and hatred.

Calm in action, calm in speech, calm in mind, serene, emptied of all earthly appetites, this Bhikkhu is called “The Serene One”.

Let him arouse himself, let him examine himself; thus self-guarded and vigilant, the Bhikkhu will live in happiness.

In truth, one is one’s own protector, one’s own refuge. Know there fore how to control yourself as the horse dealer controls a noble steed.

Filled with gladness and faith by the teaching of the Buddha, the Bhikkhu attains the state of perfect peace, cessation of all compounded existence.

The young Bhikkhu who consecrates himself to the Teaching of the Enlightened One, illumines this world like the moon coming forth from behind the clouds.

“My comment is: Always be kind and you will be free from suffering, always be contented and happy, and you will radiate your quiet happiness.”