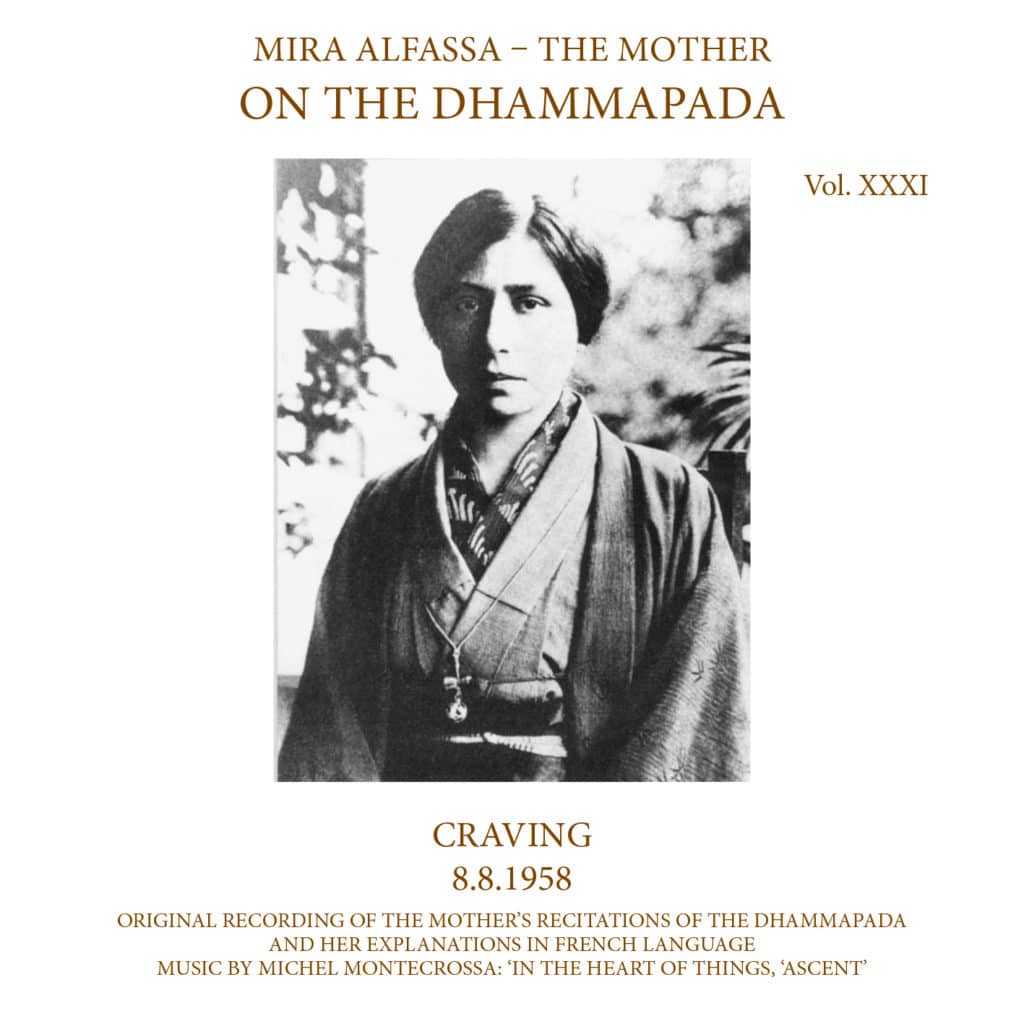 Original recording of The Mother’s recitations of the Dhammapada and her Explanations in French language
Music by Michel Montecrossa: ‘In The Heart Of Things, ‘Ascent’

The craving of a heedless man grows like the Maluva creeper.

Like a monkey seeking fruits in the forest, he leaps from life to life.

For one who in the world is overcome by the craving that clings, his miseries increase like Birana grass after the rains.

For one who in this world can overcome this craving that clings and is so difficult to master, his sorrows fall away like water from a lotus leaf.

To all who are gathered here, I say for your welfare: pull out the roots of your craving, as you uproot Birana grass. Do not let Mara crush you again and again as a flood crushes a reed.

As a tree, though felled, springs up once more if the roots remain intact, even so sorrow will return again and again until all craving is rooted out.

The misguided man, who cannot resist the thirty-six strong currents of craving, is swept away by the flood of is eagerness for pleasure.

Everywhere these currents flow and the creeper (of craving) springs up and increases. Wherever you see it springing up, cut out its roots with the force of wisdom.

Allowing their minds to be attracted by the enjoyment of transient objects, men who crave pleasure become a prey to birth and to decay.

Beset by craving, men run around like a hare in a trap. Bound by the chains of attachment, they come again and again to sorrow.

Beset by craving, men run around like a hare in a trap.

One who, delivered from craving, yet runs back to it, lo, he is like a freed man who returns to bondage.

What the wise call a strong bond is not made of iron, wood or rope; but the craving for jewels and ornaments, for wife and children, is a far stronger bond.

The wise say that it pulls you downward, and though it seems to be loose, it is hard to be rid of. This too the wise cut off; renouncing the pleasures of the senses, free from craving, they take to the homeless life.

Those who are bound by their passions are drawn back into the stream, like a spider caught in his own web. This too the wise cut off; renouncing the pleasures of the senses, free from craving, they take to the homeless life.

One who is troubled by evil thoughts, who is controlled by his passions, who seeks only pleasure, his craving grows steadily; he makes his bonds strong indeed.

One who delights in subduing evil thoughts, who is vigilant and can distinguish impurities, he will put an end to his cravings, he shall break the bonds of Mara.

He who has reached the goal, who is without fear and free from craving and impurity, he has plucked out the thorns of existence; this is his last incarnation.

One who is free from craving, unattached, who knows the words and their meanings, who knows the arrangement of the texts in their sequence, he indeed has put on his last body. He alone is called “The Man of Great Wisdom.”

I have vanquished all, I know all; unconditioned, all renouncing, delivered by the extinction of craving, having understood all by myself, whom shall I call my teacher?

Riches ruin the fool, but not one who seeks the other shore. By craving for riches, the fool ruins himself and others with him.

Weeds are the bane of the fields; passion the bane of mankind. Therefore whatever is given to those freed from passions yields abundant fruit.