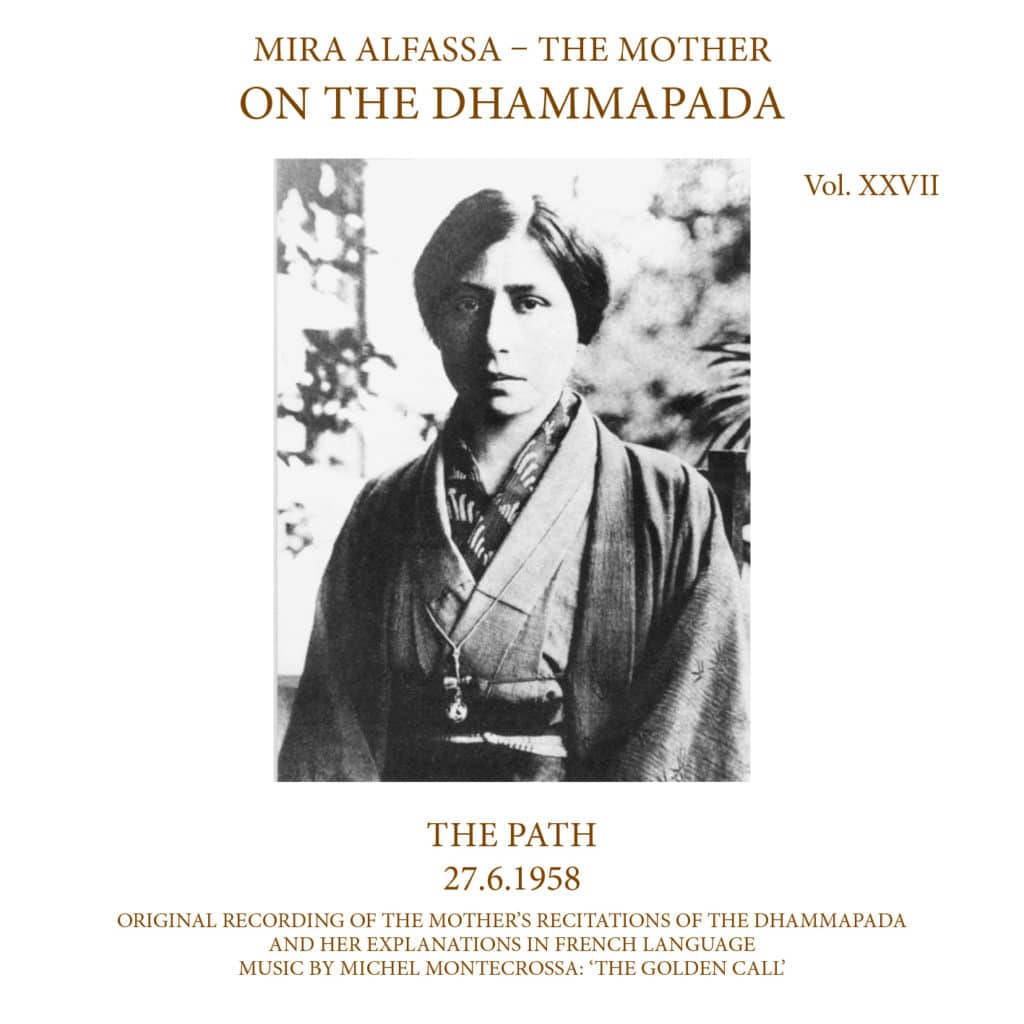 Original recording of The Mother’s recitations of the Dhammapada and her Explanations in French language
Music by Michel Montecrossa: ‘The Golden Call’

Truly, this is the Path; there is no other which leads to purification of vision. Follow this Path and Mara will be confounded.

By following this Path, you put an end to suffering. This Path I have made known, since I learned to remove the thorns (of life).

The effort must come from oneself. The Tathagatas only point out the Path. Those who meditate and tread this Path are delivered from the bondage of Mara.

“All conditioned things are impermanent.” When one has seen that by realisation, he is delivered from sorrow. That is the Path of purity.

“All conditioned things are subject to suffering.” When one has seen that by realisation, he is delivered from sorrow. That is the Path of purity.

“All things are insubstantial.” When one has seen that by realisation, he is delivered from sorrow. That is the Path of purity.

He who though young and strong, does not act when it is time to act, is given to indolence, and his mind is full of vain thoughts; one who is so indolent will not find the Path of wisdom.

Moderation in speech, control of the mind, abstention from evil actions, thus these three modes of action are to be purified first of all, to attain the Path shown by the sages.

Cut down all the forest (of desires) and not one tree alone; for from this forest springs fear. Cut down this forest of trees and undergrowth, O Bhikkhus. Be free from desire.

As long as one has not rooted out of oneself entirely the desire of a man for a woman, the mind is captive, as dependent as a suckling on its mother.

Root out self-love, as one plucks with his hand an autumn lotus. Cherish only the Path of the peace of Nirvana that the Sugata has taught us.

Here shall I live in the rainy season; I shall stay there in the winter and elsewhere in the summer. Thus thinks the fool and knows not what may befall him.

And this man who is attached to his children and his cattle, is seized by death and carried off, as a sleeping village is swept away by torrential floods.

Neither children, nor father, nor family can save us. When death seizes us, our kinsmen cannot save us.

Knowing this perfectly, the intelligent man, guided by good conduct, does not delay in taking up the path which leads to Nirvana.

“One really has the impression that during the last century a light came and spread upon the earth with the result that certain ideas, which were once idea-forces, new ideas with the power to stir up the consciousness in men, have lost their relevance, they are now old. A new light is at work. In practice, the progress is not very great, even in some respects perhaps there has been a retrogression, but in the mind, in the understanding, in the intellectual vision of things, there has truly been a great change. It seems we are marching on the way at an accelerated pace and these things which used to be of the first importance are becoming almost commonplace in the light of new discoveries. Life as it is is bad, disorder is everywhere, suffering is everywhere, confusion is everywhere, chaos is everywhere, ignorance is everywhere – we all know it, don’t we? It seems so hackneyed. But that one can emerge from it through a total realisation, a total transformation, through a new light that will establish order and harmony in things, is a message of hope that has to be given. This is the true, the dynamic message.
A new life must be built. Then all these difficulties that seemed so unsurmountable – oh! they fall of themselves. When you can live in light and joy, are you going to cling to shadow and suffering?”