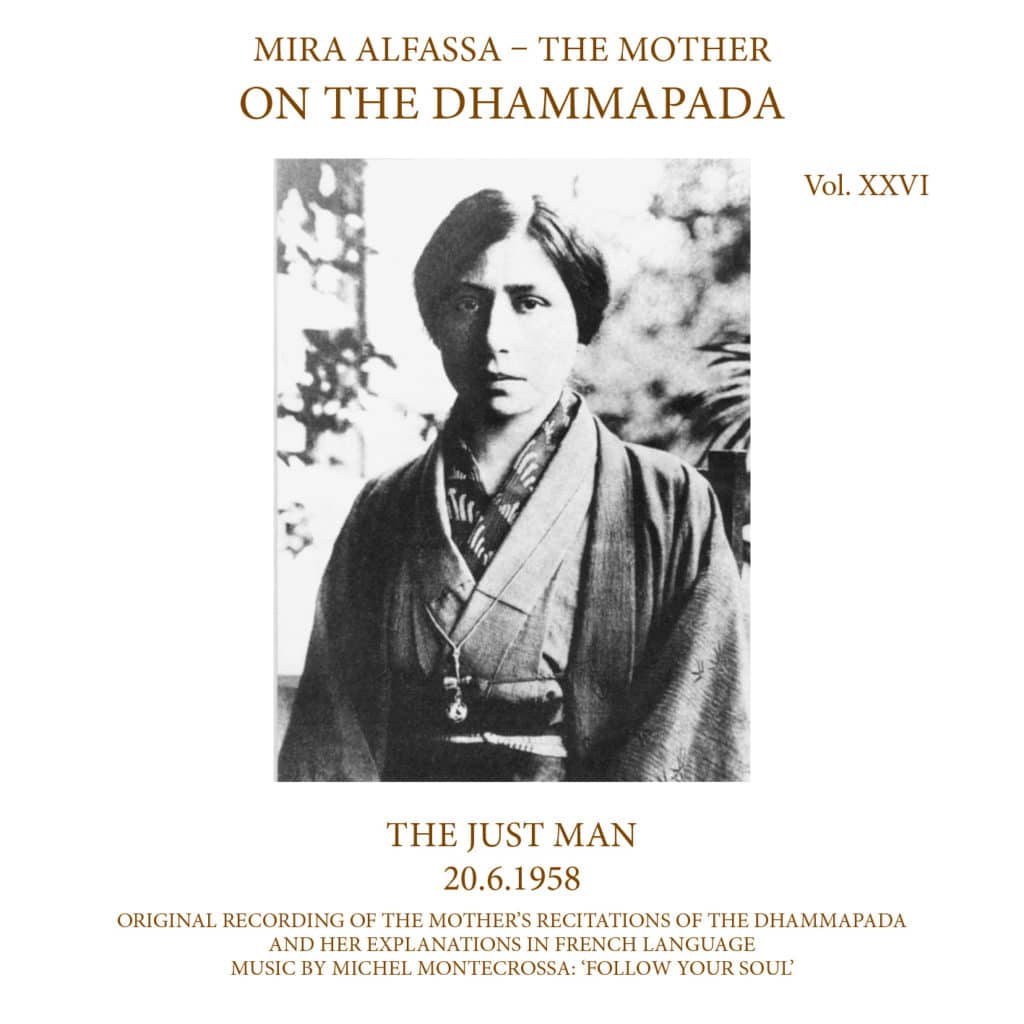 Original recording of The Mother’s recitations of the Dhammapada and her Explanations in French language
Music by Michel Montecrossa: ‘Follow Your Soul’

A man is not just if he judges arbitrarily. The wise man is one who distinguishes the just from the unjust, who judges others in full knowledge according to law and equity; this guardian of the Law is called a just man.

The sage is not the man who speaks most. The man who is compassionate, friendly, fearless, is called a sage.

It is not by much speaking that the Doctrine is upheld; but he who has studied the Doctrine, even a little, and mentally realised it, he alone upholds it. He does not neglect it.

A man is not a Thera because his hair is grey. He is ripe in years but he has aged fruitlessly.

But one who possesses the truth, virtue, non-violence and self-mastery, who is free from all impurity, who is wise, is indeed a Thera.

Neither eloquence nor a beautiful appearance grace a man who is jealous, selfish, deceitful. But one in whom such faults are completely uprooted and destroyed, that wise man is fully graced by them.

As for the man who is undisciplined and untruthful, his shaven head does not make him an ascetic. Full of desire and greed, how can he be a Samana?

A man is not a Bhikkhu simply because he takes alms for his food. The observance of vows is not enough to make him a Bhikkhu.

But he who is above both good and evil, who leads a pure life, who walks with understanding in this world, he can be called a Bhikkhu.

One who observes silence does not by that become a sage, if he is ignorant and foolish; but he who can weigh good and evil as in a balance and make his choice, him one can call a sage.

He who by contemplation measures this world and the other, he is a sage.

A man who does harm to living creatures does not become a Noble One. One who practises non-violence towards all creatures is called a Noble One.

It is neither by moral precepts and observances, nor by a wide knowledge, nor by practising meditation, nor by a solitary life, nor by thinking, “I have attained the bliss of liberation which is unknown to those who live in the world”, that one can be called a Bhikkhu. Be on your guard, O Bhikkhus, until you have attained the extinction of all desire.

“The Buddha said or has been made to say that when one is free from all desire, one necessarily enters into infinite bliss. This bliss may be a little dry and anyway it does not seem to me to be the quickest way.
If at the outset one were to seize the problem bodily, jump into it with courage and determination and, instead of undertaking a long, arduous, painful, disappointing hunt after desires, one gives oneself simply, totally, unconditionally, if one surrenders to the Supreme Reality, to the Supreme Will, to the Supreme Being, putting oneself entirely in His hands, in an upsurge of the whole being and all the elements of the being, without calculating, that would be the swiftest and the most radical way to get rid of the ego. People will say that it is difficult to do it, but at least a warmth is there, an ardour, an enthusiasm, a light, a beauty, an ardent and creative life …
The difference is between climbing a mountain by going round and round, slowly, laboriously, step by step, for hundreds of years, and spreading invisible wings and soaring straight to the summit.”