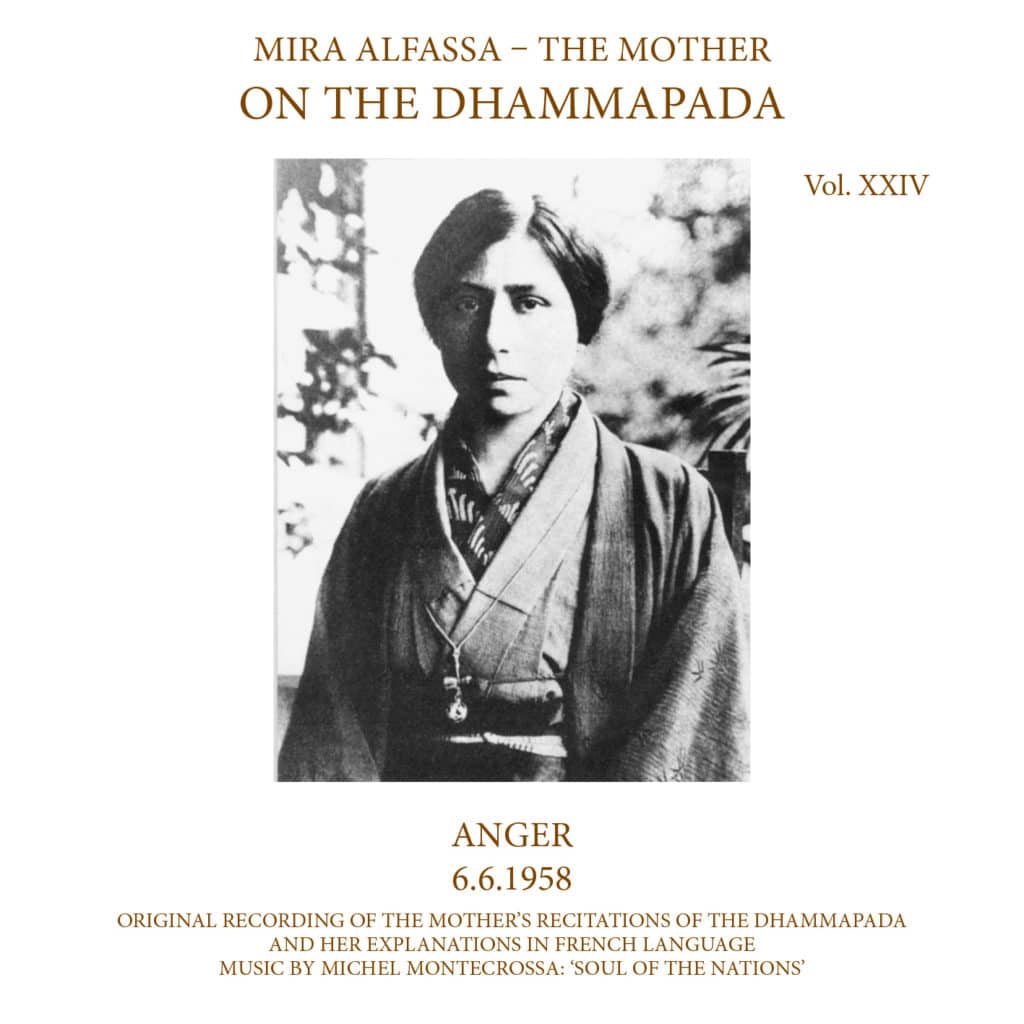 Original recording of The Mother’s recitations of the Dhammapada and her Explanations in French language
Music by Michel Montecrossa: ‘Soul Of The Nations’

One should cast away anger, one should reject pride, one should break all bonds. One who is not attached to name or form, who possesses nothing, is delivered from suffering.

Whosoever masters rising anger, as one who controls a moving chariot, that one indeed is worthy of being called a good charioteer. Others merely hold the reins.

Oppose anger with serenity, evil with good; conquer a miser by generosity and a liar by the truth.

Speak the truth; do not give way to anger; give the little you possess to one who asks of you; by these three attributes, men can approach the gods.

The sages who are void of violence, who are always in control of their senses, attain that imperishable state where pain is no more.

Those who are always vigilant and who discipline themselves day and night, whose minds are always turned towards Nirvana, will see their impurities disappear for ever.

There has never been and never will be, nor is there now, one who receives only blame or only praise.

If a man is praised by the sages, who have observed him day after day, for being intelligent, without reproach, endowed with knowledge and virtue, who then would dare to blame him who is as pure as gold? Even the gods and Brahma praise him.

Be on your guard against the wrath of the body. Control your actions, and leaving behind wrong ways of acting, practise perfect conduct in action.

Be on your guard against wrath in speech. Control your words, and leaving behind wrong ways of speaking, practise good conduct in speech.

Be on your guard against wrath of mind. Control your thoughts, and leaving behind wrong ways of thinking, practise good conduct in thought.

“I suggest that every one of you should try – oh! Not for long, just for one hour a day – to say nothing but the absolutely indispensable words. Not one more, not one less.
Take one hour of your life, the one which is most convenient for you, and during that time observe yourself closely and say only the absolutely indispensable words.
At the outset, the first difficulty will be to know what is absolutely indispensable and what is not. It is already a study in itself and every day you will do better.
Next, you will see that so long as one says nothing, it is not difficult to remain absolutely silent, but as soon as you begin to speak, always or almost always you say two or three or ten or twenty useless words which it was not at all necessary to say.”