On The Dhammapada, Vol. 22 - Happiness 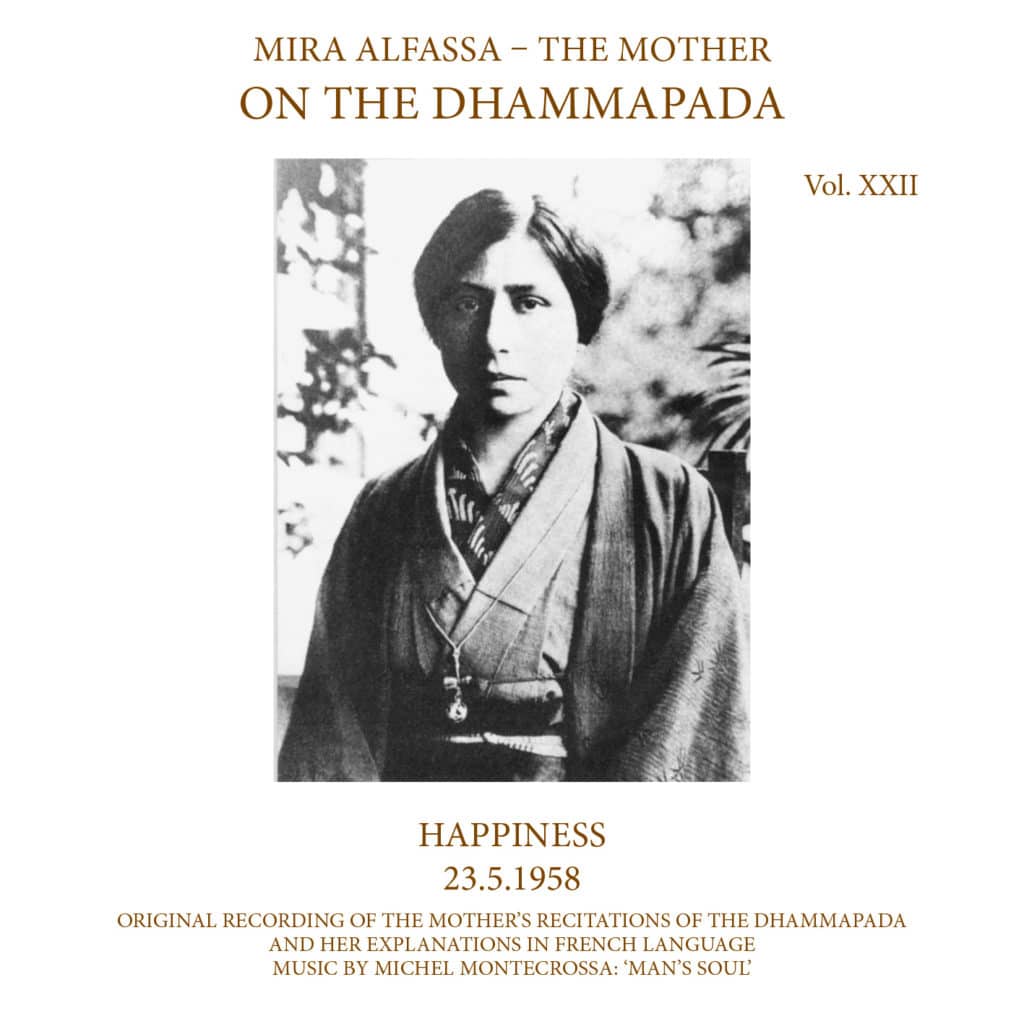 Original recording of The Mother’s recitations of the Dhammapada and her Explanations in French language
Music by Michel Montecrossa: ‘Man’s Soul’

Among those who hate, happy are we to live without hatred. Among men who hate, let us live free from hatred.

Among those who are full of greed, happy are we to live without greed. Among the greedy, let us live free from greed.

Happy indeed are we who own nothing. We shall feed upon delight like the radiant gods.

Victory engenders enmity, and one who is vanquished lives in distress. The man of peace lives in gladness, disdaining both victory and defeat.

Hunger is the worst malady; existence is the worst calamity. One who has understood this realises that Nirvana is the Supreme Happiness.

Health is the greatest acquisition, contentment the greatest treasure. A faithful friend is the best companion and Nirvana the Supreme Happiness.

It is good to contemplate the Noble Ones; to live near them is an endless happiness. One could be always happy by avoiding the sight of fools.

One who frequents fools is bound to suffer long; the company of fools is as painful as that of enemies. To live in the company of the sages is to share the happiness of one who lives among his kinsmen.

Seek therefore the company of the sage who is steadfast, learned, wise, devoted and noble. Follow the example of such a good and wise being, as the moon follows the path of the stars.

“Happiness! Happiness means to live in the Truth, to live in communion with Eternity, with the true Life, the Light that never fails. Happiness means to be free, free with the true Freedom, the Freedom of the constant, invariable union with the Divine Will.
Gods are those that are immortal, who are not bound to the vicissitudes of material life in all its narrowness, pettiness, unreality and falsehood.
Gods are those who are turned to the Light, who live in the Power and the Knowledge; that is what the Buddha means, he does not mean the gods of religion. They are beings who have the divine nature, who may live in human bodies, but free from ignorance and falsehood.
When you no longer possess anything, you can become as vast as the universe.”