On The Dhammapada, Vol. 13 - The Fool and the True Consciousness 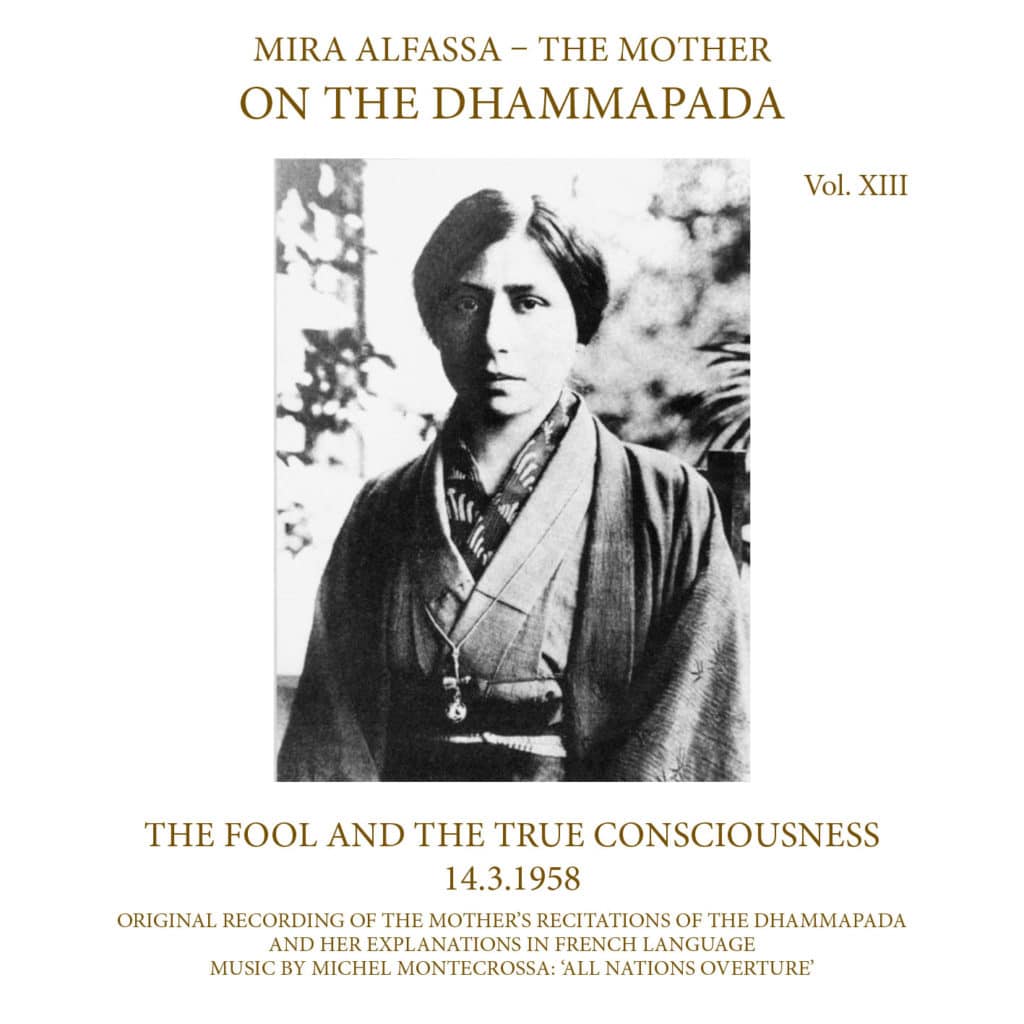 Original recording of The Mother’s recitations of the Dhammapada and her Explanations in French language
Music by Michel Montecrossa: ‘All Nations Overture’

If a man cannot find a companion who is his superior or even his equal, he should resolutely follow a solitary path; for no good can come from companionship with a fool.

The fool torments himself by thinking, “This son is mine, this wealth is mine.” How can he possess sons and riches, who does not possess himself?

The fool who recognises his foolishness is at least wise in that. But the fool who thinks he is intelligent, is a fool indeed.

Even if the fool serves an intelligent man throughout his life, he will nevertheless remain ignorant of the truth, just as the spoon knows not the taste of the soup.

If an intelligent man serves a wise man, if only for a moment, he will quickly understand the truth, just as the tongue instantly perceives the savour of the soup.

The fools, those who are ignorant, have no worse enemies than themselves; bitter is the fruit they gather from their evil actions.

The evil action which one repents later brings only regrets and the fruit one reaps will be tears and lamentations.

The good action one does not need to repent later brings no regret and the fruit one reaps will be contentment and satisfaction.

As long as the evil action has not borne its fruits, the fool imagines that it is as sweet as honey. But when this action bears its fruits, he reaps only suffering.

Though month after month the fool takes his food with the tip of a blade of Kusa grass, he is not for all that worth a sixteenth part of one who has understood the truth.

An evil action does not yield its fruits immediately, just as milk does not at once turn sour; but like a fire covered with ashes, even so smoulders the evil action.

Whatever vain knowledge a fool may have been able to acquire, it leads him only to his ruin, for it breaks his head and destroys his worthier nature.

The foolish monk thirsts after reputation, and a high rank among the Bhikkhus, after authority in the monastery and veneration from ordinary men.

“Let ordinary men and holy ones esteem highly what I have done; let them obey me!” This is the longing of the fool, whose pride increases more and more.

One path leads to earthly gain and quite another leads to Nirvana. Knowing this, the Bhikkhu, the disciple of the Perfectly Enlightened One, longs no more for honour, but rather cultivates solitude.

“This seems to point directly to hypocrites who take up the external forms and appearances of wisdom but in their hearts keep all the desires, ambitions, the need for show, and live to satisfy this ambition and these desires instead of living for the only thing that is worth living for: attainment of the true consciousness, integral self-giving to the Divine, the peace, the light and the delight that come from the true wisdom and self-forgetfulness.”