On The Dhammapada, Vol. 10 - Effort, Vigilance, Discipline and Self-Mastery 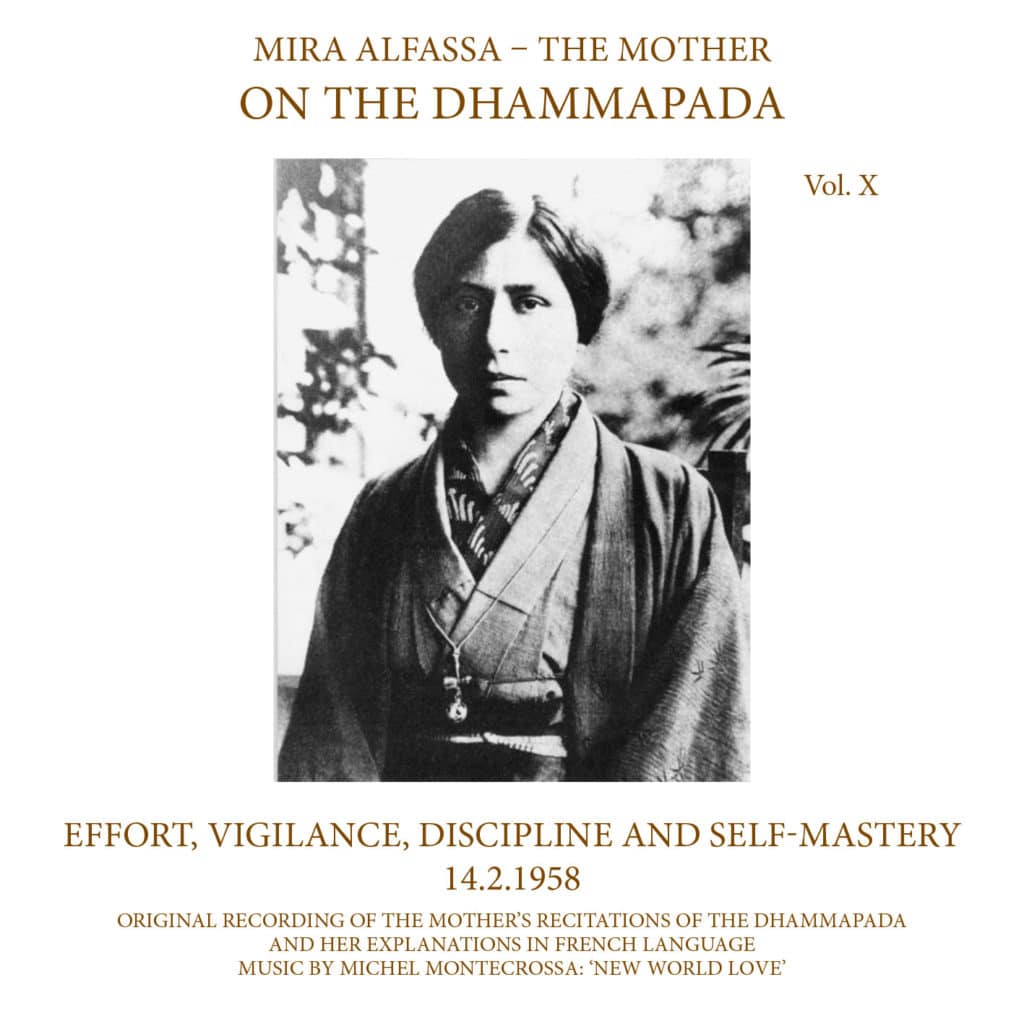 Original recording of The Mother’s recitations of the Dhammapada and her Explanations in French language.
Music by Michel Montecrossa: ‘New World Love’

14 February 1958
By his effort, his vigilance, his discipline and self-mastery, the intelligent man should create for himself an island which no flood can submerge.

The fools, devoid of intelligence, give themselves up to negligence. The true sage guards vigilance as his most precious treasure.

Do not let yourself fall into carelessness, nor into the pleasures of the senses. He who is vigilant and given to meditation acquires a great happiness.

The intelligent man who by his vigilance has dispelled negligence, mounts to the heights of wisdom, whence he looks upon the many afflicted as one on a mountain looks down upon the people of the plain.

Vigilant among those who are negligent, perfectly awake among those who sleep, the intelligent man advances like a rapid steed leaving behind a weary horse. Vigilance is admired. Negligence is reproved. By vigilance, Indra became the highest among the gods.

The Bhikkhu who delights in vigilance and who shuns negligence advances like a fire consuming all bonds, both small and great.

The Bhikkhu who takes pleasure in vigilance and who shuns negligence can no longer fall. He draws near to Nirvana.
Dhammapada

“Certainly there is a moment in the course of the inner growth when far from having to make an effort to concentrate, to become absorbed in the contemplation and the seeking of the truth and its best expression – what the Buddhists call meditation – you feel, on the contrary, a kind of relief, ease, rest, joy, and to have to come out of that in order to deal with things that are not essential, everything that may seem like a waste of time, becomes terribly painful. External activities get reduced to what is absolutely necessary, to those that are done as service to the Divine. All that is futile, useless, precisely those things which seem like a waste of time and effort, all that, far from giving the least satisfaction, creates a kind of discomfort and fatigue; you feel happy only when you are concentrated on your goal. Then you are really on the way.”
Mira Alfassa – The Mother