Audio-CD: On The Dhammapada, Vol. 17 - Punishment 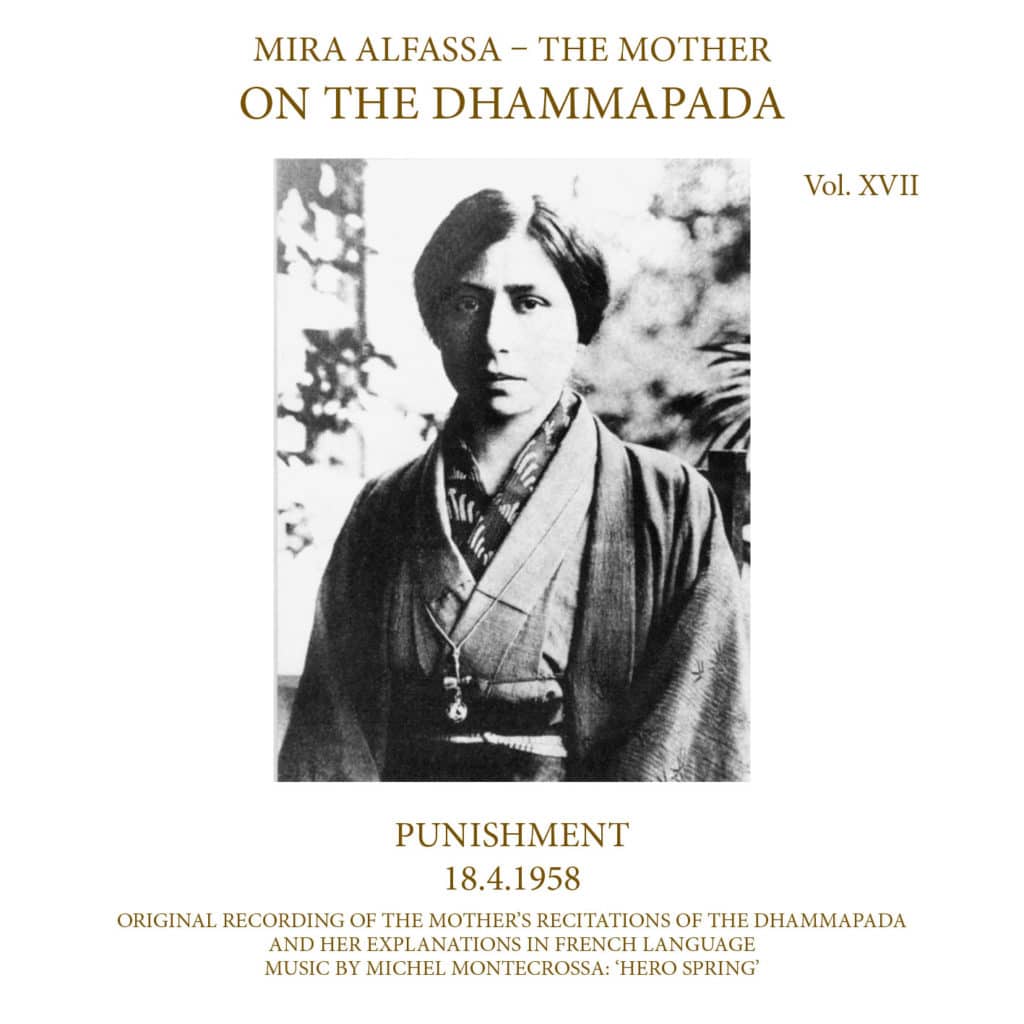 Original recording of The Mother’s recitations of the Dhammapada and her Explanations in French language
Music by Michel Montecrossa: ‘Hero Spring’

All tremble when faced with punishment; all fear death. Seeing others as ourselves, do not strike, do not cause another to strike.

All tremble when faced with punishment; life is dear to all. Seeing others as ourselves, do not strike, do not cause another to strike.

Whosoever hurts creatures eager for happiness for the sake of his own happiness, nevertheless will not obtain it after his death.

Whosoever does not hurt creatures eager for happiness for the sake of his own happiness, will obtain it after death.

Never speak harsh words to anyone, for they will be returned to you. Angry words cause suffering and one who utters them will bear them in return.

If you remain as silent as a broken gong, you have already entered Nirvana, for violence no longer abides in you.

As the cowherd, with his stick, drives the herd to pasture, so old age and death drive the life out of all living beings.

The fool does evil without knowing it; he is consumed and tormented by his actions as by a fire.

He will endure intense pain, he will suffer disastrous losses and terrible injury, serious illness, madness.

Or he will come in conflict with authority, he will be the object of gross calumny, he will lose his near ones or his possessions.

Or else fire will destroy his dwelling-place; and at the time of the dissolution of his body he will be reborn in Hell.

Neither going naked or with matted hair, nor remaining dirty, nor fasting, nor sleeping on the bare ground, nor smearing the body with ashes, nor the practice of ascetic postures, can purify the mortal who has not cast away all doubt.

However richly he is dressed, if a man cultivates tranquillity of mind, if he is calm, resigned, master of himself, pure, if he does no harm to any creature, he is a Brahmin, he is an ascetic, he is a Bhikkhu.

Is there in this world a man beyond reproach that merits no blame, as a thoroughbred needs no blow from the whip?

Like a spirited horse, be quick and eager for the goal. By trust, virtue, energy, meditation, the quest for truth, perfection of knowledge and conduct, by faith destroy in you all suffering.

Those who build waterways lead the water where they want; those who make arrows straighten them; carpenters shape their wood; the sage controls himself.

“We must go farther on, we must advance, climb greater heights and go beyond the arid search for pleasure and personal welfare, not through fear of punishment, even punishment after death, but through the development of a new sense of beauty, a thirst for truth and light, through understanding that it is only by widening yourself, illumining yourself, setting yourself ablaze with the ardour for progress, that you can find both integral peace and enduring happiness.
One must rise up and widen—rise up… and widen.”