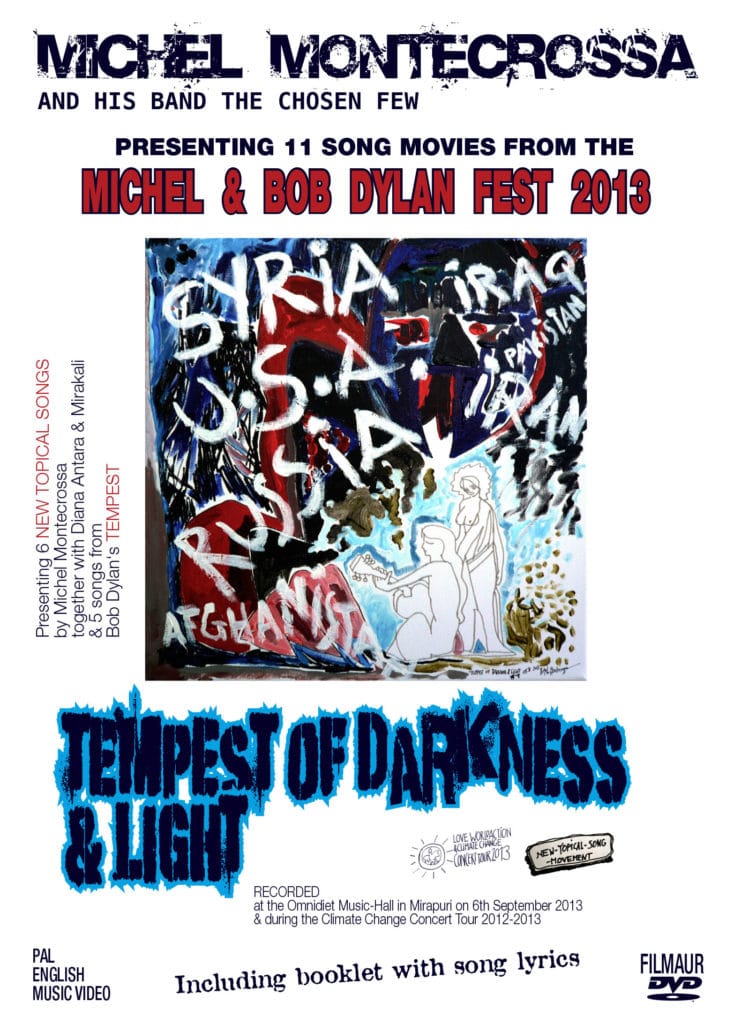 Michel Montecrossa and his band The Chosen Few are presenting as special DVD and download 11 music movies from the Michel & Bob Dylan Fest 2013 ‘Tempest Of Darkness & Light’. Released by Mira Sound Germany and Filmaur Multimedia the special DVD and download is a ‘anything goes’ masterpiece of Full-Stream-Of-Consciousness movie making created by Michel Montecrossa, Diana Antara and Mirakali as a groundbreaking and cool Topical Art and Cinéma Vérité landmark production for Cybergeneration.
The 11 music movies from Michel Montecrossa’s Michel & Bob Dylan Fest 2013 ‘Tempest Of Darkness & Light’ have as opening song Michel Montecrossa’s ‘Malala’s Tempest Of Darkness & Light’ showing pure Topical Cinéma Vérité confronting insane brutality with the victorious Light of Soul and Humanity. Bob Dylan’s ‘Tempest’ comes next and is located in a crossover space between dreamworld and waking state creating a surreal interaction between history and a fluid state of reality building. ‘Calm Beauty’ is Michel Montecrossa’s grand mystic song from his movie ‘The House Of Time, Part Two’ lifting the veil between life and death. It leads to the precarious ‘Duquesne Whistle’ of Bob Dylan and from there to the unvarnished truth movie ‘Burnin’ Heart’ showing love action the warrior way. Bob Dylan’s ‘Soon After Midnight’ shows the other side of confusing love with error. ‘Strong Love, Strong Life’ is Mirakali’s superb song movie presenting what it means not to be an idiot claiming to know anything about love. ‘Narrow Way’ is Bob Dylan’s dirge in nowhere land and ‘Talking World War & The Nato Gang’ is Michel Montecrossa’s uncompromising intrusion on the war business lies of polito corruptos and banka gangstas who want to kill Syria, the Middle East and soon the entire world. Apocalypse goes on with Bob Dylan’s ‘Tin Angel’ and a sick lust and madness relation soap. Its Endzeit comes to an end with Michel Montecrossa’s sovereign ‘Strong Is My Christmas Dream’ leading out of the fog and dirt of a distorted mind clinging to suffering and half knowledge into the full brilliance of living Love and Oneness.

Michel Montecrossa says about his Michel & Bob Dylan Fest 2013 music movies:
“The Free Music Revolution for which I stand is equally the Free Movie Revolution and I am every day intensely grateful for living and breathing in the radiance of the unlimited creativity of both these Revolutions of Consciousness, Love and Humanity. The 11 music movies for the Michel & Bob Dylan Fest 2013 ‘Tempest Of Darkness & Light’ are meant for all who like to feel freedom from the totalitarianism of brainwash and limited outlooks.”